Sereies of "Cosmic Fantasy"
in - brain all of us have the 'universe' in our brain.
The human brain is the collection of a hundred billion of neurons.
The neurons in brain are bound together to create a network,
which is as complicated as the structures of the galaxies in the whole universe.
The human brain, which is consisted of the elements prepared by the universe,
is one system that works in accordance with the complex law of physics similar to the cosmic one, while consciousness and mind are ingenerated by the neuron network in brain to perceive what is going on around, and we take action accordingly.
Like the grand structure of the galaxies in the expansive space, the neuron network in brain incubates our complex consciousness and mind.
All of us have the 'universe' in our brain.
A wonder how 'human consciousness' is generated from the brain in material form.
There might be 'space consciousness' in the universe in material form.
Kanji Kawabata 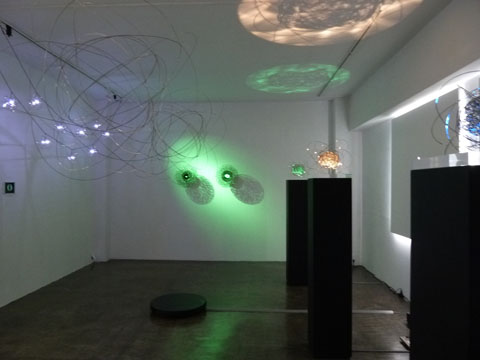