Misako Yarita “What is the poetry of Bob Dylan who exchanged Warhol’s work for a sofa ?”

There is a well-known episode featuring Bob Dylan.
He once received the "Double Elvis" canvas from Andy Warhol as a form of payment.
After carrying it back home he exchanged it for a sofa.

"A Hard Rain's A-Gonna Fall" which Patti Smith sang at the Nobel Prize Ceremony was influenced by another poem.
Matsumoto Takashi's "Momen no handkerchief" adopted Dylan's style of composition and expression.
Bob Dylan, whose lyrics protest poverty, war, and discrimination, embedded the voice of the people into his songs.

Poet Yarita Misako will give a talk on the historical background and lyrics of Bob Dylan who was swayed by the poet Allen Ginsberg. 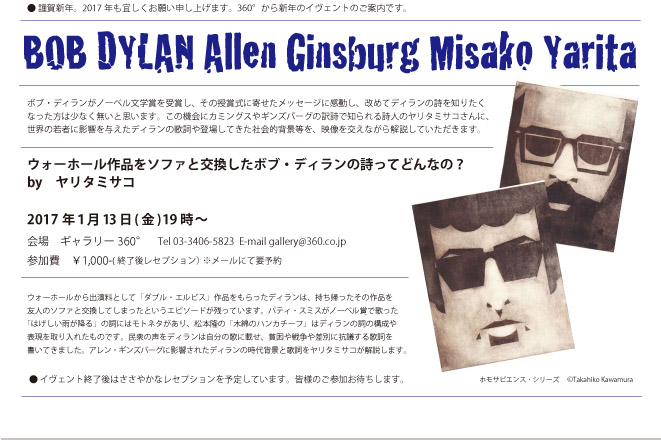