Gallery 360 is pleased to announce "Sightseeing Bus Tour Vol.2 for Ben Patterson's My Grand 70th Birthday Tour".
Ben Patterson's old friends AY-O and we plan "HAPPINGS FOR SIGHTSEEING BUS TRIP VOL.2" for his birthday. Originally it was organized by AY-O in 1966, performing Fluxus events by artists and audience during the sightseeing in Tokyo. This is the second time. We will go to Mt.Fuji, doing Fluxus events on the road and meet Ben Patterson at five steps to celebrate his 70th birthday.
We are expecting your participation.

Yes, it would be very simple to fly, non-stop from Frankfurt to Tokyo.
But, how boring ! I will travel with the "TRANS-SIBERIAN RAILROAD" …and realize an old dream of George Maciunas…To make a "GRAND FLUXUS CONCERT TOUR" in various cities along the "TRANS-SIBERIAN".

Maybe, this will be a "TOUGH STUFF" expedition, or maybe I will be pleasantly surprised. ----- Ben Patterson 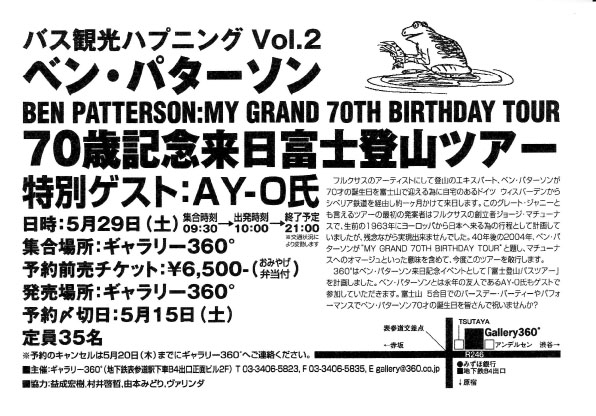