This "SMILE" work was hold at the exhibition "Das Gift" at Haunch of Venison in Berlin, Germany in September 2010, then it was done at Gallery 360° in Tokyo in December.

This time, the installation is to shoot participants’ smiles and to project it on the wall in a loop, and it is a device to transfer smiles from a person to person and to connect them.

Suppose that the smiles of all the people in the world are recorded and they are played without being noticed…it would be a peaceful world. We wish this project is continued in somewhere in the world.

ABOUT WORKS OF SMILE
text by Jon Hendricks

In 1968, Yoko Ono, wrote a text about her film "Smile".
In this text, she wrote: "Last year, I said I'd like to make a 'smile film' which included a smiling face
snap of every single human being in the world. But that had obvious technical difficulties and was very likely that the plan would have remained as one of my beautiful never-nevers."

Now, more than 40 years later, the opportunity to make this particular version of her Smile film that she conceived of in 1967 has become possible.

The idea of Smile has been a theme in Yoko Ono's work from the time of her earliest art activities, including her 1968 film, Smile, which is a 51 minute film made with a very high-speed camera of John Lennon smiling. The film is projected at normal speed. It is currently being shown in Roppongi, on the the Mori Towers. "A Box of Smile", from that same period, which was originally a silver box with a lid and a glass mirror on the bottom. When you opened the lid, you saw your face and smiled.

Yoko Ono's 2010 participatory Smile film is a realization of her 1967 concept. Each visitor is invited to record their smile, which is then added to a continuously enlarging film of snapshots of people's smiles. It is a device to connect people's smiles from all over the world.

a gift to the participants : a white paper box with a print of his portrait which he took it by himself 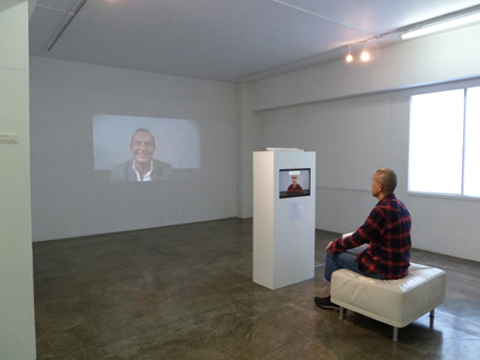