Yoko Ono's WATER SOURCE (2012) combines PARTS OF A LIGHT HOUSE (1966) and a participatory work TIME TO TELL YOUR LOVE (2012) which includes an element "prove your love".  For those who participate they will receive a gift from the artist and the photograph taken will be placed on the wall.  For the work My Mommy Is Beautiful (2004), you are also invited to bring an image of your mother and write thoughts or remembrances about her to add to the canvas.

Parts of a Light House (1965) from Indica Gallery Catalogue

In 1967, John Lennon invited me for lunch at his Kenwood residence in England.
It was about six months after we first met in my Indica Gallery Show in London.
He told me that he read about the Light House in my publication and if I would build one for him in his garden.
"Oh, that was a conceptual light house!  I'm convinced that one day, it could be built, but I don't know how to do it." I said with a laugh.  "Oh, I thought the Americans had come up with something" was what he said.  And that was that.
I still marvel at the fact that John was touched by that particular concept in my catalogue, and 40 years ago at that!
In 1967, for my Lisson Gallery show in London,  I re-wrote the concept more succinctly.
This was the way I should have expressed the idea to John in Kenwood, instead of laughing it off.

LIGHT HOUSE
The light house is a phantom house that is built by sheer light. You set up prisms at a certain time of day, under a certain evening light which goes through the prisms, the light house appears in the middle of the field like an image, with this image, you can actually go inside if you wanted to. The light house may not emerge every day, just as the sun doesn't shine every day.
Yoko Ono, 1965  Rewritten for Lisson Gallery, London, 1967


MY MOMMY IS BEAUTIFUL
Write your memory of your mother and/or paste a photography of her on the canvas
Y.O. 2012

PROVE YOUR LOVE
Prove your love and receive a present as a gift from me.
Proving your love will be photographed and added to the image wall.
y.o. winter 2012

A gift will be given to those who participate, one per couple or group that is photographed. The gallery will provide someone to take the photographs and distribute the gifts. 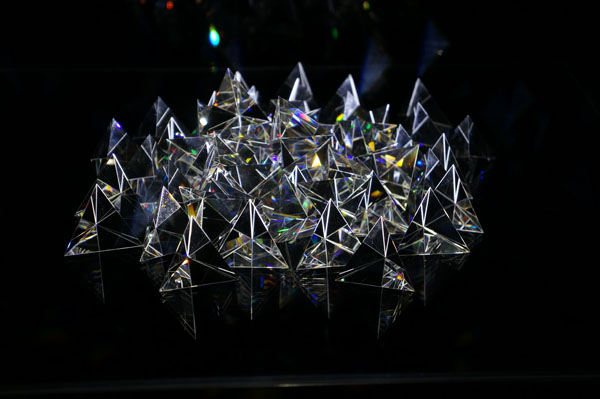