GALLERY 360°is pleased to announce an exhibition by Yumi Tohyama “NON DUAL LETTER”, the first since her last show here in 2011.
‘Dual Letter’, a unique lettering system created by Tohyama that can be read in both English and Japanese, is an ongoing project. Although her starting point was originally the creation of caractors that read on both face and back, she has recently begun to believe that “the power of a word lies between two things, that is non dual’. This time we exhibit Tohyama’s experimental new series of work. 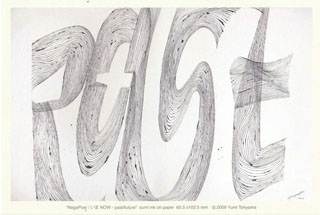